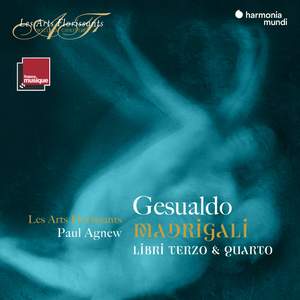 The singers pay studious attention to the poetry and its nuances, painting the words with a rich palette and contrasting light and shade to reflect Gesualdo’s chiaroscuro...Harmonia Mundi’s recording... — BBC Music Magazine, May 2021, 5 out of 5 stars More…

Following the acclaim which met their 2-CD set devoted to the first two books of Gesualdo's madrigals (2020 Gramophone Award), Paul Agnew and Les Arts Florissants now focus on the composer's Ferrara period. Books III and IV mark a turning point in Gesualdo's output. The murderous prince's inner demons seem to be reflected in the heightened expressiveness of these madrigals, whose reliance on chromaticism and dissonance was so far ahead of it's time that it's like would not be heard again until centuries later.

The singers pay studious attention to the poetry and its nuances, painting the words with a rich palette and contrasting light and shade to reflect Gesualdo’s chiaroscuro...Harmonia Mundi’s recording is clean and immediate: individual parts are easily discernible within the finely balanced ensemble and the words cut through with feverish intensity.

Fully integrated with the musical line, the singers avoid melodrama through intimate, small gestures as if acting for screen, not stage.