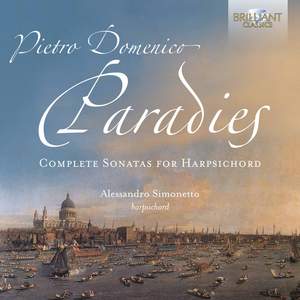 Paradies: Sonata No. 5 in F Major

Paradies: Harpsichord Sonata No. 9 in A Minor

Paradies: Harpsichord Sonata in A

Paradies: Sonata No. 4 in C Minor

Paradies: Sonata No. 3 in E Major

Pietro Domenico Paradies (1707-1791), also known as Paradisi, was born in Napoli. He was most probably a pupil of Nicola Porpora (1686- 1768) and began composing primarily for the theatre. In 1746 he moved to London where he established himself as a teacher of the harpsichord and voice.

Today, his reputation rests on a collection of twelve harpsichord sonatas, presented here on the piano. This collection appeared in 1754 when it was issued by the London publisher, John Johnson.

All the sonatas in the collection are formed from two contrasting movements: the first longer and the second shorter, usually in a shared key. All bear the influence of both Alessandro Scarlatti (1660-1725) and Domenico Scarlatti (1685-1757) through their structural idiom, innovative keyboard virtuosity and various harmonic eccentricities.

Played by Alessandro Simonetto, whose earlier recording for Brilliant Classics with works by Mattheson and Bustijn met with enthusiastic critical acclaim.