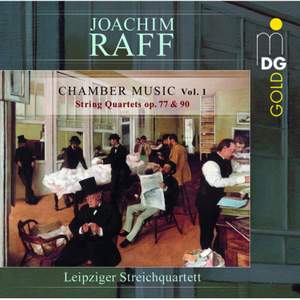 Having grown up in Switzerland, Joachim Raff first tried his hand with moderate success in numerous places as a composer of salon pieces. Franz Liszt became aware of the young man's talents and hired him as a kind of private secretary. In Weimar Raff orchestrated some of Liszt's early symphonic poems and gained his appreciation. This first recording by the Leipzig String Quartet shows that this was no accident; Raff's first two quartets are large-format works which reveal great ambitions. Raff's music cannot be pigeonholed either in the "New German" or the "Brahmsian" category - perhaps the reason why he was admired by such diverse colleagues as Richard Strauss, Peter Tchaikovsky or even Franz Liszt. As founding director of the Hoch'sche Conservatory in Frankfurt, Raff enjoyed great recognition among his contemporaries in later years. To rekindle this in our time, the new recording of the Leipzig String Quartet is a highly welcome beginning.