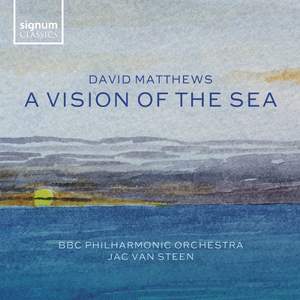 David Matthews: A Vision of the Sea

The two pieces at the heart of this release date from 2013, Matthews’s 60th year. They and the two shorter works reveal him at the height of his powers in both abstract and programmatic writing.... — BBC Music Magazine, March 2021, 4 out of 5 stars More…

Matthews, D: A Vision of the Sea

A frequent collaborator with both the BBC Philharmonic Orchestra and Jac van Steen, David Matthews' recording explores both the natural world and the symphonic idea, the second of which has, in his words, 'obsessed me since I started composing at the age of 16'. As well as the 'Sinfonia' and 'Symphony No. 8', the programme includes 'Toward Sunrise'; inspired by the sound of the sun (a rising fourth of C-F), as recorded by scientists at Sheffield University and 'A Vision of the Sea'; drawn from the sights and sounds of the English Channel near the composer's home in Deal, Kent.

The two pieces at the heart of this release date from 2013, Matthews’s 60th year. They and the two shorter works reveal him at the height of his powers in both abstract and programmatic writing. Each is played with a winning combination of broad melodic sweep and finely observed detail by the BBC Philharmonic Orchestra under conductor Jac van Steen.

Matthews’s Eighth projects a winning eloquence and energy without ever lapsing into ponderousness...His well-placed climaxes never pull their multicoloured punches, with imaginative orchestration admirably conveyed in these finely played and excellently engineered recordings...The world of nature is never far away in Matthews’s music, and two other recent orchestral works bear witness to his delight in contexts where haunting fragments of birdsong can emerge.

Having performed 11 of his works and commissioned five, the orchestra has a strong association with Matthews. You sense it in the precision and warmth of their playing. All the music here is steeped in spray and tide, as the title, taken from Shelley and used by Matthews for a four-movement work, suggests. Based in Deal, in Kent, with the sound and sight of the English Channel ever present, Matthews conjures a poetic seascape in this work, with the evocative calls of herring gulls never far away.