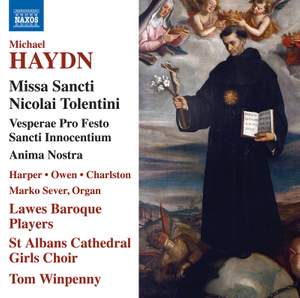 Largely upbeat, though not without its more reflective moments, Michael Haydn’s mass enjoys a spirited performance here, though a more robust choral sound would have been welcome. — BBC Music Magazine, February 2021, 3 out of 5 stars More…

Michael Haydn’s colourful and inventive music is uplifting and expressive in equal measure, but his music has been eclipsed by that of his elder brother Joseph, and by Mozart. Sacred music is central to Michael Haydn’s oeuvre and was considered by some contemporary critics as superior to Joseph’s. Encompassing a broad range of textures and styles, parts of the Missa Sancti Nicolai Tolentini demonstrate Haydn’s music at its most exhilarating and energetic, and his supreme gift for empfindsames (‘sensitive’) lyrical writing is also to be heard in the Vespers.

Largely upbeat, though not without its more reflective moments, Michael Haydn’s mass enjoys a spirited performance here, though a more robust choral sound would have been welcome.

Listeners familiar with Mozart’s Salzburg sacred music will not be surprised by the style of his elder contemporary...Haydn deploys the choral voices [in the Mass] in unison with a pair of soprano soloists in music of graceful charm, perhaps taken a little carefully but accompanied vividly by the one-to-a-part strings and trumpets of the Lawes Baroque Players.