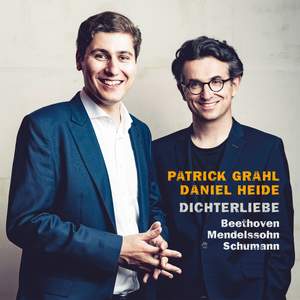 No. 5. Ich will meine Seele tauchen

Even more than in Beethoven's case, Mendelssohn's Lieder were intended for performance in the salons of the prosperous bourgeoisie: a convivial circle of highly qualified connoisseurs who shared the same outlook, and often a similar financial status. Those members of the upper middle classes were the musical link and the sociological crossroads between Hausmusik and the concert hall. Mendelssohn often wrote songs as gifts for the friends he was visiting, frequently as settings of their own texts: the considerable technical challenges they contained still needed to be manageable for members of those circles.

Thanks to their songlike or folk-like character, certain works by Mendelssohn (for instance from oratorios such as Elijah ) became true classics, even across broad swaths of the population. The narrower the compositional framework in his songs, the more noteworthy were Mendelssohn's divergences: he often unobtrusively proved his mastery by varying upon a strict form (extending phrases or inserting small elements of surprise in strophic songs), thus providing variety, excitement, and ironic musical fractures.

Robert Schumann's Lied output was probably more crucial for his existence than in Mendelssohn's case, and likewise more significant due to the artistic dialogue he held with his wife Clara: songs thus took up a greater place in his life. Composed in Leipzig in 1840 (Schumann's well-known "year of songs"), Dichterliebe Op. 48 on texts by Heinrich Heine offers an excellent example of Schumann's use of a self-contained episode with a homogeneous poetic idea as a point of departure for an entire song cycle. Thus he not only rearranged the order of Heine's poems from the Lyric Intermezzo (published in 1827 as part of Das Buch der Lieder ), but chose the title Dichterliebe ("The Love of a Poet") himself. Here the piano goes far beyond pure instrumental accompaniment: instead of merely illustrating the text, it provides its own dimension of interpretation as a partner on equal standing with the voice, both in terms of extension as well in terms of artistic niveau.