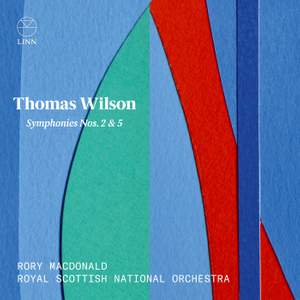 The two symphonies here, completing Linn’s recorded survey (missing only the suppressed No. 1), may have stylistic differences, but both are notably taut affairs, propelled by motivic cells more... — BBC Music Magazine, February 2021, 4 out of 5 stars (Performance) / 3 out of 5 stars (Recording) More…

Described by The Herald as Scotland’s leading modern symphonist, composer Thomas Wilson (1927–2001) was central to the renaissance of 20th-century music in Scotland.

Wilson’s music was championed by the Royal Scottish National Orchestra throughout his life, so it is fitting that the RSNO has recorded a second volume of his symphonies to showcase the strength and inventiveness of his orchestral writing.

Wilson’s Second Symphony reveals him to be a mature composer, full of intent and confident in his own style. Premiered in 1965 it is a tautly conceived work, darkly powerful in parts but full of colour and lyricism.

The Fifth Symphony was commissioned by the Scottish Chamber Orchestra for their 25th-anniversary season in 1998 and was to be Wilson’s final work. Inspired by the challenge of writing for smaller symphonic forces, Wilson created a piece full of dramatic energy contrasted with moments of breathtaking tranquillity that stands apart from his other symphonies.

Rory Macdonald returns to conduct the RSNO following the critical success of their recording of Wilson’s Third and Fourth Symphonies.

The two symphonies here, completing Linn’s recorded survey (missing only the suppressed No. 1), may have stylistic differences, but both are notably taut affairs, propelled by motivic cells more harmonic than melodic, nervously explored from every angle...Both receive committed performances from Rory Macdonald’s orchestral forces.

Throughout this new recording both the recording and the performances are excellent. The Royal Scottish National Orchestra plays with complete authority in scores that often highlight the work of individual players and/or sections, and the result is totally convincing.

For the most part Wilson’s idiom is a conservative one, the movements [of the Second] finely crafted, sensitively scored and conveying a sense of atmosphere which verges on the cinematic…Both works benefit from strongly committed performances by Rory Macdonald and his players. The recording is slightly on the clinical side, but not enough to preclude a strong recommendation for anyone wanting to explore the work of this under-represented composer.

The recording showcases Wilson’s formal and orchestral mastery......This is clearly the mark of a true symphonist......Rory Macdonald and the Royal Scottish National Orchestra commit themselves wholeheartedly, and do these often beautiful works full justice. The recording and production are excellent on all counts........a very fine release that deserves whole-hearted acclaim.

No 2 is in three movements; it is music of exalted rhetoric, edgy intensity and the solidest craftsmanship. No 5, his last completed work, is a superb single span that embraces a luminous excursion for strings. Splendid, devoted performances.

Remarkably precise and punchy in its directional purpose. Conductor Rory Macdonald elicits a performance of rhythmic vigour and emotional heft.