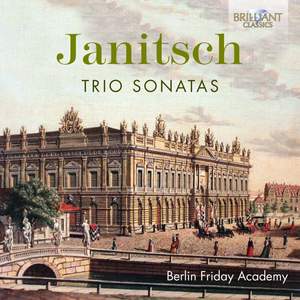 Johann Gottlieb Janitsch (1708–ca 1763) was one of the leading musical lights of Berlin during the mid-eighteenth-century. The Prussian capital city was then growing rapidly in population and wealth, well on its way to becoming one of Europe’s great cultural centres. Janitsch, then as now, was known primarily for his chamber music, whose style, a special Berlin version of the late Baroque (or early pre-Classical), is often described as galant or empfindsam meaning ‘sensitive’ or ‘expressive’.

Janitsch established an ‘academy’, a musical club that met regularly for rehearsals and occasional concerts. Janitsch’s Friday Academy—named for the day of the week on which it met— involved amateur as well as professional musicians, performing sonatas and concertos as well as Italian arias and cantatas. After Frederick succeeded his father as king in 1740, Janitsch and his Friday Academy moved with him to the court to Berlin.

The Berlin Friday Academy (named after Janitsch!) is a Berlin- based ensemble made up of young players from around the world – a group of passionate, historically-inspired musicians striving to bring about beauty through the performance, recording, and scholarly discussion of eighteenth-century music.