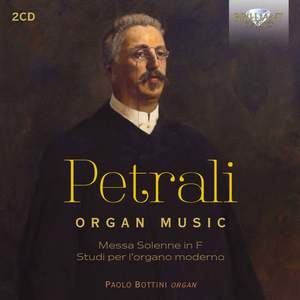 Vincenzo Antonio Petrali (1830-1889) was an important musical figure of 19-th century Italy. He was a highly gifted organist, pianist, violinist, conductor, composer and teacher. A virtuoso organist and improviser he wrote a large number of organ works, specifically for use on the newly built Italian organs.

Petrali’s organ music is always characterized by great structural formality. His style evolved from a taste, in his early works, for orchestral-operatic elements, to music influenced by the reforms of the Cecilian movement, which sought to revive Gregorian chant in Catholic worship. The titles of many of his works link to the liturgy of the mass, but in reality these were concert pieces, in grand romantic style.

This new recording presents Petrali’s Messa Solenne for organ, as well as a selection of 34 Etudes for the Modern Organ.

Played on 3 historical Lingiardi organs, dating from the time of composition of the music, instruments with which the composers was well acquainted, by organist Paolo Bottini, who already successfully recorded CDs for Brilliant Classics with keyboard works by Pescetti and Valeri.

The complete technical specifications of the organs are included in the booklet.