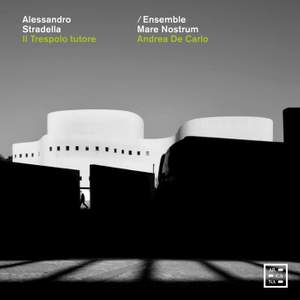 The splendid bass Riccardo Novaro brings rich tone, perfect timing and a real sense of character to the title role, a truly commanding performance...De Carlo’s pacing is exemplary, though he... — Opera, February 2021 More…

A major achievement for The Stradella Project, now in its sixth volume, this world-premiere complete recording of the comic opera in three acts Il Trespolo tutore comes at a time of important new discoveries concerning Stradella’s life and his operas. This includes the recovery of Doriclea (A454) and the recent discovery of Amare e fingere, soon to be released in the same series.

‘Il Trespolo tutore was first staged at the Teatro del Falcone in Genoa for Carnival 1679. Alessandro Stradella’s only comic opera, it unquestionably deserves a place among the masterpieces of this genre. On a libretto by Giovanni Cosimo Villifranchi, the entertaining plot mirrors that of a successful comedy published a decade earlier: Amore è veleno e medicina degl’intelletti o vero Trespolo tutore by the Florentine Giovanni Battista Ricciardi. The paradoxical behaviour of the characters, including a ward who falls in love with her tutor and a madman who regains his wits through love, contribute to moments of intense comic delight.’ – Arnaldo Morelli

The splendid bass Riccardo Novaro brings rich tone, perfect timing and a real sense of character to the title role, a truly commanding performance...De Carlo’s pacing is exemplary, though he persists in using an over-lush continuo group. An outstanding addition to a major series that has already established Stradella as one of the most significant names in Italian opera during the second half of the 17th century.