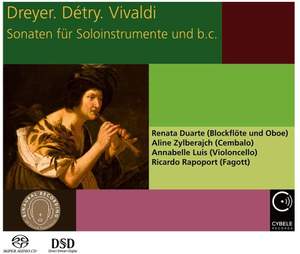 Domenico Maria Dreyer was born in Florence. These compositions follow the Italian model in being cast in four movements, and are clearly written in a Venetian manner of expression that unites contrasts of mood, lyricism, virtuosity, folk dances, large progressions, and clear bass rhythms, as well as descriptive and spatial elements; there are, however, exceptions in the form of more archaic elements such as the do-minant cadenzas in the slower movements, which are nearer Roman music.

Moreover, it is astonishing how the recorder, an instrument known throughout Europe, is totally uninhibited in appropriating all sorts of transcriptions just at the moment when it swiftly undergoes a keen renewal of interest among the protagonists of the stylistic experiments of the early 18th century: These words find a good example in the sonata by Louis Détry, a musician of unknown (French?) origin. His sonata recorded on this SACD, the only known manuscript by Détry, could be a

transcription of a sonata for bassoon that the musician composed for his own purposes. It is a real "pasticcio sonata", which in its own way combines the mixed style with fast movements "alla Vivaldi", which are rhythmic and full of both contrasts and asymmetries, while making use of a German theme, and with slow movements whose role model is an absolutely French grace.

Antonio Vivaldi had a very special relationship with recorder and bassoon alike: The sonata on this edition is a sustained firework of concertante virtuosity, of the kind that Vivaldi uses only on special occasions in his late work. The instruments mimic each other, accompany and ignore each other, and share passages in which they connect for eternity, as in a recurring section at the end of the second movement, when the inevitable question becomes who will run out of breath first. The work covers broad territory, from theatre to introspective lyricism, without neglecting gallant showcases of technical wizardry or contrapuntal seriousness.