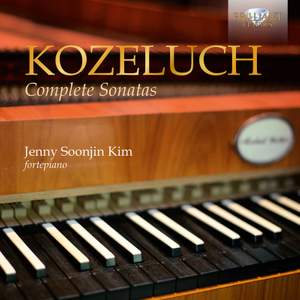 In 1790, one musical dictionary described Leopold Kozeluch as ‘without question the living composer most loved by young or old’; his works displayed 'liveliness and grace, the noblest melody combined with the purest harmony, and of the most pleasing organization blended with rhythm and modulation.’ His music may have been eclipsed by the legacies of the towering figures Carl Philipp Emanuel Bach, Haydn, Mozart and Beethoven since his death in 1818, but performers such as Jenny Soonjin Kim are leading a Kozeluch revival which should see the reputation of this Bohemian-born master rise once more.

Having completed his studies in Prague, including lessons with Dussek, he made his name in Vienna as a teacher and successfulpublisher as well as composer. Though he composed in all the major genres, the best of him is to be found in the keyboard sonatas gathered here. He was regarded as a pioneer of writing for the fortepiano rather than the harpsichord, and he won particular praise from the influential writer Charles Burney: ‘[Kozeluch’s] style is more easy than that of Emanuel Bach, Haydn or Mozart; it is natural, graceful and flowing, without imitating any great model, as almost all his contemporaries have done. His modulation is natural and pleasing, and what critics of the old school would allow to be warrantable. His rhythm is well phrased, his accents well placed, and harmony pure.’

Jenny Soonjin Kim recorded this series between 2013 and 2018 at the Kresge Chapel in Claremont Graduate University, where she oversees the teaching programme for piano and fortepiano studies. Sylvia Berry (Early Music America 21, no. 4, Winter 2015) wrote of the second Kozeluch volume: ‘Kim’s playing is crystalline and lyrical, with exquisitely sensitive phrasing. She is an assured virtuoso who interprets Kozeluch’s music beautifully.’ Now gathered in a single volume they present the first chance to assess his output for keyboard at super-budget price, and in stylish new recordings on a magnificently colourful instrument, a modern copy of a Viennese fortepiano from 1795 made by Anton Walter.

The 50 keyboard sonatas by Leopold Kozeluch, for the first time complete, played on a period instrument!

Leopold Kozeluch (1747-1818) was in his time a highly regarded, even famous composer, on a par with C.P.E. Bach and even Mozart. His keyboard sonatas, although relatively modest in length, share the same qualities with those of his illustrious contemporaries: strong focus on melody and melodious figuration, vivid and brilliant accompaniments and a genuine expression of feeling, both happy and dramatic. His 50 keyboard sonatas are a true treasure trove of hidden “pianistic” gems!

The sonatas in this new set clearly show an evolving, advanced style in terms of dramatic expression and complexity, as well as certain melodic and harmonic characteristics also found in the keyboard works of Mozart, Beethoven and even Schubert.

An international artist who regularly performs music ranging from Bach to Schoenberg in major venues across Europe, Asia and North America, Jenny Soonjin Kim is also a faculty member at Claremont Graduate University in California (the venue for this recording), where she teaches piano and fortepiano. It is her keen interest in scholarship – particularly historical performance practice – that led to her discovery of Kozeluch.

‘Kim’s playing is crystalline and lyrical, with exquisitely sensitive phrasing. She is an assured virtuoso who interprets Koželuch’s music beautifully. This set will interest pianists who would like to augment their repertoire with unknown gems from the period.’ (Early Music America).