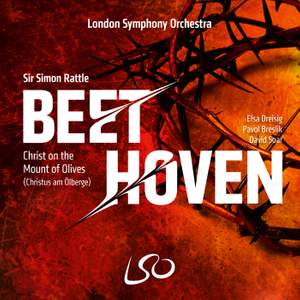 Beethoven: Christ On the Mount of Olives

...the full chorus acquits itself well as commentators on one of the angel’s arias and in the rousing finale; and the male chorus of well-drilled soldiers takes the listener right into the Garden... — Choir & Organ, March 2021, 5 out of 5 stars More…

No. 1a. Introduzione. Grave - Adagio

No. 3b. Duetto. "So ruhe dann mit ganzer Schwere"

Composed in 1803, while Beethoven was also writing the ‘Eroica’ Symphony, Christ on the Mount of Olives (Christus am Ölberge) is the composer’s only oratorio and combines the emotive force of his later Missa Solemnis with the theatre of a Bach Passion. With orchestra, chorus and soloists, it tells the story of Jesus’ prayer and arrest in the Garden of Gethsemane and also reflects the emotional pressure Beethoven was under at the time.

This recording by Sir Simon Rattle, with acclaimed singers Elsa Dreisig, Pavol Breslik and David Soar was made during the London Symphony Orchestra’s celebration of Beethoven’s 250th anniversary.

“When I came to the Mount of Olives, I immediately was simply puzzled. Why isn’t this piece played? Of course, it’s a mixed piece and there are weird flaws and edges but so there are in the Ninth Symphony, they’re part of the personality.

“It’s a fascinating moment in his life when he was starting really to deal with his hearing loss. He’d written the Heiligenstadt Testament, where he really confessed to his suicidal thoughts on losing the single-most important ability a musician could have. There is a kind of unearthly, underground sensation of some of it, there’s also a real feeling of naive belief in the possibility of things being better. I think it is completely heaven.” - Sir Simon Rattle

“What Rattle made clear is that the music is full of life. It is hard to imagine this performance being bettered.” - Financial Times  “Backed by London Symphony Chorus, the soloists in this performance are well up to the challenge, bass David Soar providing the grounding over which tenor Pavol Breslik, as Jesus, sings out with noble plangency, while the sound of soprano Elsa Dreisig, as the Seraph, rings angelically through the hall.” - The Independent

“Christ on the Mount of Olives is full of things to appreciate: there’s an anticipation of the heroism in the face of darkness that would characterise Fidelio, but there are also passages that hark back to the best of Mozart” - Bachtrack

...the full chorus acquits itself well as commentators on one of the angel’s arias and in the rousing finale; and the male chorus of well-drilled soldiers takes the listener right into the Garden of Gethsemane, with some very agile and robust singing. Their German diction is excellent and their sound full of dramatic colour.

Greatest plaudits, however, must go to the three vocal soloists, each of whom is simply stunning...David Soar is rock-solid in the role, with his dark but focused sound simply perfect for the part…Slovakian Pavol Breslik is quite magnificent, scaling all the heights with ease and exhibiting a top register most tenors would die for. Perhaps even more impressive, however, is French-Danish soprano Elsa Dreisig, who conquers the extreme technical demands of the role of the Seraph spectacularly.FR-741

Pavol Breslik is an ardent, impassioned and very human Jesus, whilst Elsa Dreisig is appropriately radiant as the Seraph, retaining her celestial poise even as Beethoven’s typically uncompromising vocal writing takes her to high C and beyond.

What a striking work it is when done, as it is in this live performance, with such conviction and spirit.