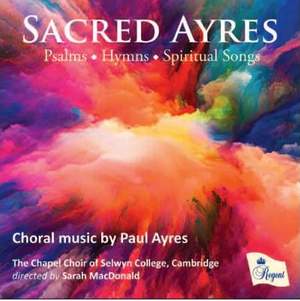 Ayres, P: When I consider thy heavens

Ayres, P: The Lord my shepherd is

Ayres, P: The Lord my pasture shall prepare

Ayres, P: This is the day

Ayres, P: Be thou my vision

Ayres, P: On this mountain

Ayres, P: God be in my head

Ayres, P: Go tell it on the mountain

Ayres, P: When the song of the angels is stilled

Paul conducts City Chorus and London College of Music Chorus (at the University of West London), accompanies Concordia Voices, and is associate accompanist of Crouch End Festival Chorus. He has led many music education workshops for children, and played piano for improvised comedy shows and musical theatre.

This is the first recording entirely devoted to his choral compositions. Reviews of recent recordings from the Chapel choir of Selwyn College, Cambridge, under their director, Sarah MacDonald, on Regent: REGCD542 ‘unanimous virtuosity. ‘ Organists’ Review ‘Excellent performances throughout ‘ Crossrhythms REGCD503 The superb choir gives as good an account of these pieces as possible.’ American Record Guide REGCD485 ‘The choirs are chameleon-like in their ability to change color, tone, timbre, mood, and idiom on the absolute fly...’ American Record Guide ‘The excellent Chapel Choir of Selwyn College, Cambridge, gives shimmering interpretations of a technically testing programme...As the music builds in so many permutations, you are left with original works of beauty in which Sarah MacDonald guides her singers to great heights.' Choir and Organ

Written with practicality in mind, Ayres’s anthems are all about generous simplicity: big, juicy unison lines, warm three- or four-part homophony and affirmative, tonal-with-a-scrunch harmonies. They cry out for a school or college choir of hundreds but are nicely showcased by the leaner Selwyn Choir, who have a more ingenuous, youthful sound than their rivals Clare or Trinity that’s well suited to the material.