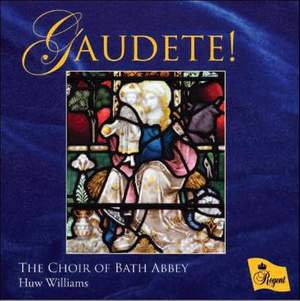 trad.: Mary had a baby

Recorded in January 2020 this is the first recording of the Bath Abbey choirs in 6 years, and their first under their new Director of Music, Huw Williams. Based around a selection of Christmas favourites, the recording opens with a stunning new arrangement of the well-known medieval carol, ‘Gaudete’. There are also some less-familiar items. Of great interest are Walford Davies’s rarely-heard setting for upper voices and piano of William Blake’s ‘The Lamb’, ‘Adam lay ybounden’ by Roy Massey, and Huw Williams’s own arrangement of ‘Away in a manger’ - written for Her Majesty The Queen’s Christmas day broadcast in December 2015. Huw Williams was Director of Music at St James’s Palace at the time, and this arrangement was written at short notice because the broadcast was to take place in a room in Buckingham Palace without accompaniment.

With uncertainty over when choirs will be able to sing again, this release will help us all celebrate both the festive season, and the great British tradition of singing which is so evident at Christmas, serving as a welcome reminder of the strength of that tradition amongst church and cathedral choirs and the need to restore the daily round of music- making as soon as it is safe to do so.

Since Bath Abbey’s foundation as a Benedictine Monastery in the 8 th century, choral music has lain at the heart of its worship. The Abbey Choirs are widely regarded as amongst the finest in Britain, performing to the highest standard. Musical and liturgical highlights of the Christian year include the Abbey’s atmospheric services held during Advent and Christmas.