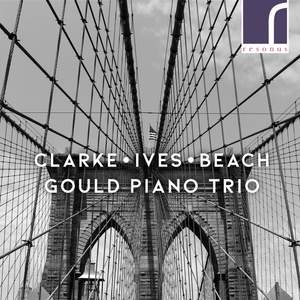 "For their debut album on Resonus Classics, The Gould Piano Trio presents three Trios with strong American ties. Charles Ives’ (1874–1954) only Trio for Violin, Cello and Piano is one of his major works is without question. Amy Beach (1867–1944) was recognized in her lifetime as one of the most acclaimed American composers. Her Trio, Op. 150, was composed in 1938 and is steeped in the developmental processes of late nineteenth century models while quoting two Inuit folk songs. Although born and educated in England, Rebecca Clarke (1886–1979) wrote her Piano Trio as part of a chamber music competition in Pittsfield MA and has been described as the finest work in the genre by any British composer."

A welcome release from The Gould Piano Trio, now into its third decade, whose repertoire stretches right across this medium...The excellence of the Gould’s playing, with sound a model of clarity and balance, yet earns this album a firm recommendation.