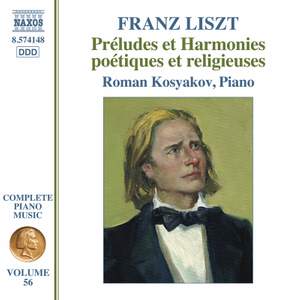 No. 4 in D-Flat Major, Dernière illusion (Completed by L. Howard)

No. 6 in A Major, Attente (Completed by L. Howard)

No. 7 in E Major, Alternative

Franz Liszt inherited strong religious convictions from his father, and the influence of sacred narratives can be found throughout his compositions. Drawn from the so-called Tasso Sketchbook, the Préludes et Harmonies poétiques et religieuses were composed after the end of Liszt’s relationship with Marie d’Agoult, and include the passionately turbulent Langueur? Descriptive titles characterise many of the brief Album-Leaves, while the legend of St François de Paule marchant sur les flots depicts the saint crossing the Straits of Messina using his cloak as a sail after being refused passage by a boatman.