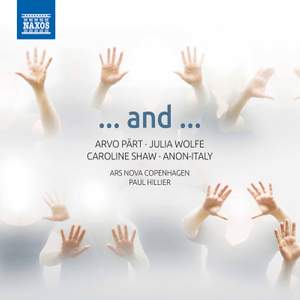 Thematic connections are to be teased out everywhere...Above all, this is consummate choral singing, Paul Hillier’s singers create moments of exquisite tenderness and stillness luminous, multi-coloured... — BBC Music Magazine, February 2021, 5 out of 5 stars More…

Shaw, C: And the Swallow

Pärt: And I Heard a Voice…

A collection of sacred music by Arvo Pärt, Julia Wolfe, Caroline Shaw, interspersed with songs from the Laudario di Cortona, Italy in arrangements by Paul Hillier.

The six laude are part of an extensive collection that was compiled during the 13th century, known as the Laudario di Cortona and rediscovered in 1876 under a stairway. Ars Nova first performed music by Julia Wolfe (b. 1958) when they premiered her Thirst in 2009. This was part of Water, a larger commission from all three Bang On A Can composers: Michael Gordon, David Lang, and Julia Wolfe. Guard My Tongue was written around the same time - the text is derived from Psalm 34. Caroline Shaw (b. 1982) is a New York composer, both solo and group singer, and violinist. Her Partita for 8 Voices won the Pulitzer Prize in 2013. Among the many songs Arvo Pärt has written, the 6 songs on this disc concern stories and apparitions, commemorations and psalms all from a sacred viewpoint.

Thematic connections are to be teased out everywhere...Above all, this is consummate choral singing, Paul Hillier’s singers create moments of exquisite tenderness and stillness luminous, multi-coloured and virtuosic, each word lovingly and clearly enunciated, each line beautifully shaped, in a performance of deep, rapt spirituality...This recording offers spiritual revelation and sonic pleasure from start to finish.

The leaps between our own time and Umbria 700 years ago seem entirely natural in Hillier’s hands and the virtuosic vocalists of Ars Nova are completely inside the music. This is an uplifting disc, superbly executed.

All of Ars Nova Copenhagen’s performances on this new recording are outstanding. The ensemble produces flawless intonation, blend and nuance at all times, and even straightforward pieces that could be dull in other hands come off very well here. The recording places the singers in a very believable church-like acoustic with space around the ensemble, but also with plenty of detail to be heard.

This is a delightful and quirky programme (something to be expected of Paul Hillier, of course), mixing contemporary music with Italian medieval laude...Ars Nova are, as usual, fully in command of both early and recent styles: this is a sparkling, thoughtprovoking recording of great originality.