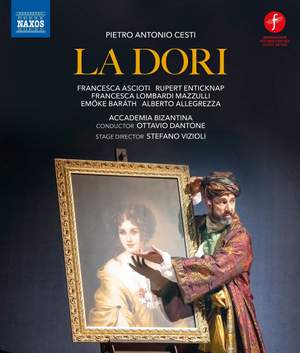 The exhilarating Innsbruck production made few concessions to historical staging, but worked brilliantly...The Innsbruck Festival assembled a strong cast to bring the opera home, all of whom... — Opera, July 2021 More…

"Pietro Antonio Cesti was one of the most outstanding champions of 17th-century Venetian opera, and La Dori was both his greatest success and a major influence on the genre in the expressiveness of its arias and duets. The story is set in Babylon on the shores of the Euphrates, and is a convoluted and richly tragicomedic tale of lost lovers, disguises and mistaken identities filled with larger-than-life and colourfully costumed characters. This revival of a forgotten masterpiece was acclaimed as ‘a production of the highest level in every aspect’ (musicaculturaonline.it)."

The exhilarating Innsbruck production made few concessions to historical staging, but worked brilliantly...The Innsbruck Festival assembled a strong cast to bring the opera home, all of whom sing with style and act with aplomb, with Emőke Baráth (a woman playing a man pretending to be a woman) outstanding in the latter respect…[Dantone's forces] respond with their customary finish and commitment.