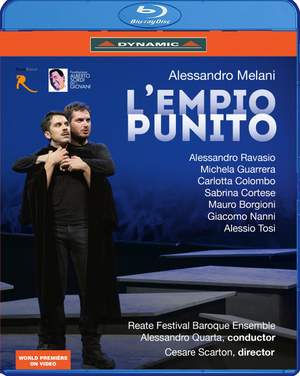 L’Empio Punito is a dramma per musica in three acts composed by Alessandro Melani, on a libretto by Giovanni Filippo Apolloni, based on Filippo Acciaiuoli’s adaptation of El burlador de Sevilla y Convidado de piedra (1616) by Tirso da Molina. It was premiered in 1669 and this release features the first performance in modern times that took place at Teatro di Villa Torlonia in Rome in October 2019, 350 years after its debut. Acrimante, the male protagonist of l’Empio Punito, can be considered the first Don Giovanni in the history of opera. His seductive power brings chaos and pain in the lives of the other characters but a lot of energy as well. Although Melani was at the beginning of his career as an operatic composer – he wrote mainly sacred music – in L’empio punito he proves to be very skilful in alternating lyrical moments and pure recitative, and in introducing at the right moment dramatic recitatives that interrupt the course of the arias.