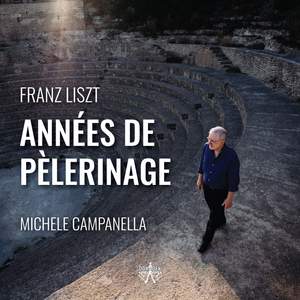 The gem of this three-disc set is the second Année. Campanella’s straightforward approach to ‘Sposalizio’, Liszt’s evocation of Rafael, strikes just the right balance between devotion and poetry.... — Gramophone Magazine, February 2021 More…

Italian pianist Michele Campanella has become renowned as a Liszt specialist, but with customary modesty and respect for the composer's music he has chosen to wait until now to record the seminal 'Années de pèlerinage'. The desire to get to grips with these pieces dates back 50 years to when Campanella was first starting to play Liszt's music, but he waited, recognising that maturity and experience would bring him closer to Liszt's own state of mind as he composed these pieces. Liszt's dazzling virtuosity is often emphasised, but in this recording Campanella has accentuated the composer's more introspective tendencies, making this a unique and truly insightful interpretation.

The three sets of Liszt's 'Années de pèlerinage' take the listener on a journey not only through the geographical regions that inspired the composer, Switzerland and Italy, but on a voyage through his own personal development, becoming increasingly inward-looking and spiritual with each cycle. The first set, 'Suisse', already displays much of that psychological scope, with works of quintessential Romanticism: poetic, evocative and wide-ranging in their emotional landscape. The second set, 'Italie', is even more organic and compact in its conception, and in the final set we hear an older composer reflecting on life and death in music characterised by impressionistic colours and profound spiritual depth. This album is a rare opportunity to hear a musician immersed in Liszt's world perform this music in a way that puts the music first; Campanella does not use Liszt's pieces as a vehicle to showcase his own skill, but records them with a sincere wish to communicate the intricacies of the repertoire. With this in mind, Campanella has recorded Liszt's works on a Steinway model D from 1892 that has survived to this day with all its original components intact, resulting in a warm and authentic sound.

The gem of this three-disc set is the second Année. Campanella’s straightforward approach to ‘Sposalizio’, Liszt’s evocation of Rafael, strikes just the right balance between devotion and poetry. ‘Il penseroso’ speaks with simple directness, with strong harmonic direction shaping its dark atmosphere...Unfortunately, Campanella’s Swiss Year is less assured...Things rally in an atmospheric ‘Les cloches de Genève’, pulling together some if not all of the purposeful loose ends that have preceded it.