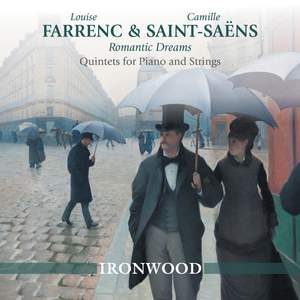 The Australian period-instrument ensemble’s work is underpinned by rigorous scholarship on performance-practice, and it certainly shows in these hugely engaging accounts of two nineteenth-century... — Katherine Cooper, Presto Classical, October 2020 More…

Be transported back in time to the salons of 19th-century Paris by one of Australias finest historically inspired ensembles. Acclaimed period-instrument ensemble Ironwood revive the sounds of the French Romantic through works by Louise Farrenc and Camille Saint-Saens. These wonderful piano quintets provide contrasting glimpses of the rapidly changing tastes of mid-19th-century Paris, from the Schubertian Classicism in Farrencs piece to Saint-Saens incredible work that seems to move from the Baroque to Blondie (yes, really!) via cabaret and the shimmering sounds of early Hollywood. Ironwoods novel interpretation of these works reflects the ensembles research into historical performance practices, informed by very early acoustic, electrical and piano roll recordings  including some by Saint-Saens himself  and by contemporaneous written texts by French and Belgian musicians. Through this research, coupled with the sounds of gut-strung stringed instruments and an original Erard concert grand piano from 1869, this recording re-imagines the expressive sound world that these composers envisaged for their sumptuous music.

The Australian period-instrument ensemble’s work is underpinned by rigorous scholarship on performance-practice, and it certainly shows in these hugely engaging accounts of two nineteenth-century piano quintets, given plenty of spirit and life through judicious use of rubato and portamento and opening out into near-symphonic grandeur in places as the strings rise to match the big-boned sonorities of Neal Peres Da Costa’s mighty 1869 Erard concert grand.