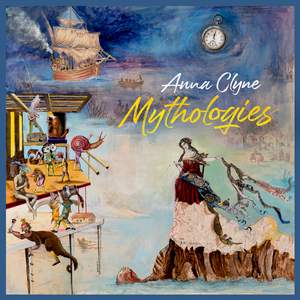 Wildly exuberant, [Masquerade] suited its celebratory purpose to a T – and its live recording does likewise in opening this album of showstopping orchestral works...the album title Mythologies... — BBC Music Magazine, Christmas 2020, 4 out of 5 stars (Performance) / 5 out of 5 stars (Recording) More…

Anna Clynne’s enormous palette of colours and special effects coalesce into an aural three- dimensional experience of striking originality. Equally there’s a comforting familiarity to her music, as she draws inspiration from historic styles that she transforms into a new musical dialect. Anna’s background in electro-acoustic music and her fascination for a variety of multi- media - including poetry, visual art and videography - combine to create rich and exhilarating textures of popular appeal. The five works on Anna Clyne: Mythologies were written over a 10-year period between 2005 and 2015. The performances on the album feature the BBC Symphony Orchestra and four inter- nationally-acclaimed conductors. Masquerade, commissioned by BBC Radio 3 to open the Last Night of the Proms 2013 and conducted by Marin Alsop, captures the spirit of that quintessen- tially English tradition. The title evokes an 18th-century outdoor festivity featuring fireworks, acrobats and street entertainers.

The album concludes with <<rewind<<, conducted by Andr de Ridder. It’s a wild romp imagin- ing the backwards scroll of a video tape complete with glitches, skips and freezes. Anna Clyne: Mythologies is available digitally as downloads and streams, CD digipak and a limited edition deluxe 2-LP vinyl release (available November 2020). CRITICAL ACCLAIM “I’m struggling to remember the last time a piece of contemporary music made me cry ... in the final movement of Anna Clyne’s DANCE, a cello concerto in all but name, a bear-hug of a theme emerges through angry, percussive col legno snaps that is so beautiful, so heartfelt that it instantly drew tears on first hearing. Repeated listening had a similar effect.” - Gramophone Editor’s Choice (on Anna Clyne’s DANCE for cello and orchestra, AV2419) “British composer Anna Clyne has written perhaps her most ambitious and appealing work so far. It’s hard to resist the gorgeous opening of DANCE, her new cello concerto ... Clyne’s orches- trations are keenly attentive to color and light, and she’s fearless in filling the concerto with melodies of undisguised beauty. Some are folkish, others are regal. All linger in the ear, begging to be heard again. - National Public Radio, 25 Favorite Songs of 2020 (on Anna Clyne’s DANCE for cello and orchestra,

Wildly exuberant, [Masquerade] suited its celebratory purpose to a T – and its live recording does likewise in opening this album of showstopping orchestral works...the album title Mythologies is taken from a Yeats poem narrated in a section of The Seamstress which reveals Clyne at her most lyrically affecting.

Composed over the past 15 years, the pieces are arranged not in chronological order but in an engrossingly musical sequence not unlike that of a concert...To my mind the most impressive piece here is This Midnight Hour (2015), inspired by poems by Baudelaire and Juan Ramón Jiménez, compact, compelling and tautly directed by Oramo. Irrespective of the conductors, it is the BBC Symphony Orchestra who shine throughout, with superbly mastered sound (by Jody Elff). Another winner from Avie.

All five works here teem with vivid, near-cinematic imagination and atmosphere, from the swaggering, carnivalesque Masquerade (the curtain-opener at the Last Night of the Proms 2013) to the turbulent fever-dream of Night Ferry, composed in 2012 for the Chicago Symphony. The highlight for me, though, is the hypnotic The Seamstress, in which Irene Buckley’s whispered fragments of a poem by WB Yeats intertwine with Jennifer Koh’s solo violin to weave a tapestry of strange, frayed beauty.