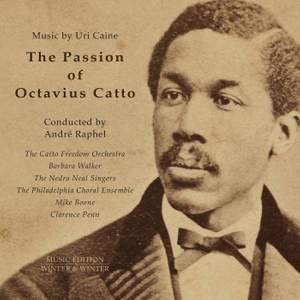 New, The Passion of Octavius Catto

Caine: The Passion of Octavius Catto

No. 4, The Philadelphia Streetcar Protests (March 1867)

No. 9, The Lament of Caroline Le Count

In a deeply impressive and magnificent synthesis of gospel, jazz and contemporary music, Uri Caine tells the moving story of Octavius Catto, born in 1839 in South Carolina to free African-American parents. Catto's family moved to Philadelphia in 1844, where he studied, became an educator, humanities scholar, top cricket and baseball player, and civil rights activist. Together with his fellow campaigners, he achieved the abolition of slavery and discrimination in elections based on race, color, or former serfdom, as well as the creation of educational institutions for African-Americans. Catto was murdered by Frank Kelly during riots on election day in 1871.