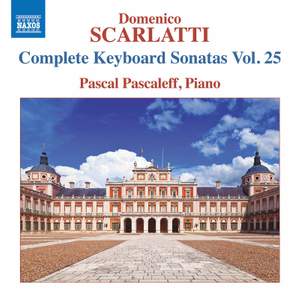 This album belongs to a series of six albums in Naxos’s new joint initiative with the Royal Birmingham Conservatoire, presenting debut albums for outstanding students. Born in Plovdiv, Bulgaria, Pascaleff was the inaugural Denis Matthews Scholar between 2016 and 2018 at the Royal Birmingham Conservatoire, where he studied with Anthony Hewitt and Pascal Nemirovski. Scarlatti’s single-movement sonatas or exercises are his greatest musical legacy. Largely designed for the Infanta, who became Queen of Spain in 1746, the music exists in a number of 18th-century manuscripts, some possibly bequeathed to the great Italian castrato Farinelli. Each of the sonatas in this volume exemplifies the limitless variety of Scarlatti’s imagination, from ‘crush’ notes and surprising pauses, through virtuosic moto perpetuos, bell evocations and busy counterpoint, to delicately restrained phrases and delightful syncopation.