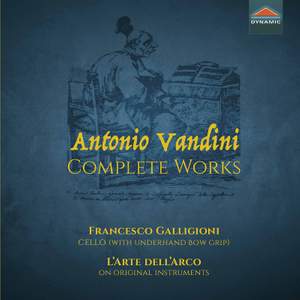 Antonio Vandini was born around 1690 in Bologna, the city where the cello knew its first glories as a solo instrument. He held several assignments in Bergamo, Venice and later Padua, where he developed a friendship with Giovanni Tartini. His virtuosity was brought to fame by Charles Burney who defined him the famous old Antonio Vandini on the violoncello who, the Italians say, plays and expresses a parlare, that is in such a manner as to make his instrument speak. Vandinis cello works are the apex of the instruments output of his time, for the persistent exploration of the high register, the frequent use of double stopping, arpeggios and chords even in unusual combinations, a variety of bowing techniques, and rapid passages. The works recorded on this release represent his complete output and are played by the specialist period ensemble L Arte dellArco, as usual on period instruments, using the original under-hand bow technique invented by Vandini himself.