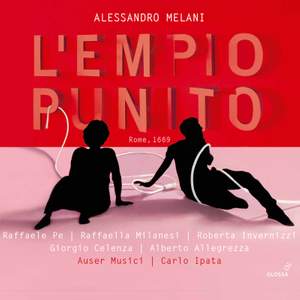 This live recording, with applause, brings Melani’s music to life with vigour and sensibility. The singing is never less than competent, and the instrumental ensemble of strings, recorders and... — BBC Music Magazine, December 2020, 3 out of 5 stars More…

Eccomi a i piedi tuoi (Live)

The legendary figure of the libertine Don Juan had been straddling European theatre and opera stages for well over a century before Mozart got into the act with his matchless Don Giovanni. Back in 1669, Alessandro Melani became the first composer to create a dramma per musica out of tales of this witty and licentious character, using a libretto provided by a pair of Roman poets in Filippo Acciaiuoli and Giovanni Filippo Apolloni from their adaption of the celebrated Spanish tragic drama, El burlador de Sevilla by Tirso de Molina. Acciauoli and Apolloni transposed the events of Seville into a mythical landscape and called Don Giovanni Acrimante and his servant Leporello Bibi. But they did not change the original plot... This world premiere recording of Melanis LEmpio Punito was captured live during the representations that took place at the Teatro Verdi in Pisa, with an outstanding vocal cast that includes Raffaele Pe in the main role (Acrimante), Raffaelle Milanesi (Atamira), Roberta Invernizzi (Ipomene), Giorgio Celenza (Bibi) and Alberto Allegrezza (Delfa). The instrumental support is provided by the fine orchestra Auser Musici conducted by a Carlo Ipata in great shape.

This live recording, with applause, brings Melani’s music to life with vigour and sensibility. The singing is never less than competent, and the instrumental ensemble of strings, recorders and a colourful continuo of lutes, harp and harpsichords both stylish and imaginative.

L’empio punito, uneven but fascinating, fills another gap in the Roman chapter on Baroque opera…The performance benefits greatly from the involvement of two of today’s great singing actresses in Baroque repertoire. Raffaella Milanesi’s moving Atamira is at her best in tragic moments, being a little shrill when forced, while Roberta Invernizzi is compelling as Ipomene.