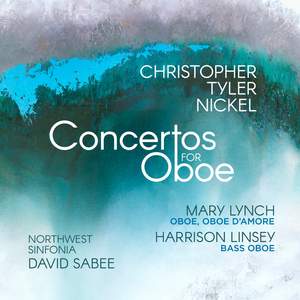 These substantial, often engaging works are accorded full justice by the soloists for whom they were conceived. Mary Lynch performs feats of agility on her brace of instruments, then Harrison... — Gramophone Magazine, November 2020 More…

Award-winning Canadian composer Christopher Tyler Nickel draws on his experience as an oboist to infuse his exhilarating concertos with the vast expressive range of the instrument and its siblings, the oboe d'amore and bass oboe. Soloists Mary Lynch and Harrison Linsey, ably supported by conductor David Sabee and the Seattle-based Northwest Sinfonia, give dazzling interpretations of these world-premiere recordings.

Christopher Tyler Nickel's contemporary classical compositions pack a bracing and emotional punch. His award-winning works for the concert hall, stage and screen have been heard in over 160 countries by audiences in the tens of thousands. His experience as an oboist instils a confidence to compose with an exhilarating freedom to explore the vast expressive range of the instrument, from lyrical and plaintive to acerbic and brittle. The world-premiere recordings of these three concertos for oboe and its lower-pitched siblings the oboe d'amore and bass oboe receive dazzling performances by Mary Lynch, principal oboe of the Seattle Symphony, and Harrison Linsey, oboist with the Washington D.C.-based National Symphony Orchestra. Grammy Award-winning David Sabee, a tireless advocate of contemporary classical music, conducts the Seattle-based Northwest Sinfonia.

"Nickel's music is full of life: imagination, invention, variation  This is composition at its best  arresting and masterful."  The Whole Note

These substantial, often engaging works are accorded full justice by the soloists for whom they were conceived. Mary Lynch performs feats of agility on her brace of instruments, then Harrison Linsey endows the bass oboe with soulfulness and gravitas. David Sabee secures a committed response from the Northwest Sinfonia (strings especially lustrous in those latter two pieces), captured in an ample but never diffuse ambience.