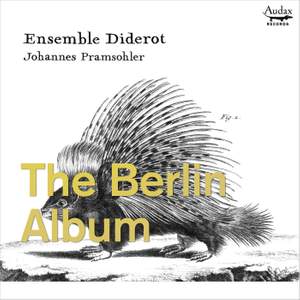 Ensemble Diderot has already released Dresden, London and Paris anthologies on this label, and very rewarding they are, too. This newcomer is no exception. Of especial merit are trio sonatas... — BBC Music Magazine, Christmas 2020, 4 out of 5 stars More…

Schulz, J A P: Trio sonata in A Minor

The violinist and director of Ensemble Diderot talks about the latest stage of his accidental musical tour of the capitals of Baroque Europe – next stop Berlin!

Following on from their critically acclaimed series, Ensemble Diderot continues its 'city series' - after Dresden, Paris and London now Berlin. All the works (except one) in this new recording are world premiere recordings - really exciting music. Uniquely, and some might say something rather radical for a "Berlin Album" no CPE Bach, no Quantz and no Flute! Instead on this rare selection of Trio Sonatas from Berlin, the Ensemble Diderot uses a wonderful copy of a Silbermann Fortepiano - the same as Frederick II had at the court - which gives an incredible variety of colours. When one contemplates mid eighteenth-century music from Berlin, the first thing that comes to mind is undoubtedly the flute-playing King Frederick II ("the Great"), and one asks oneself if a "Berlin" album should actually be a "Potsdam" album. The idea behind the present recording is to focus on Berlin, but without taking into account the three usually perceived musical protagonists: Frederick, his flute, and Carl Philipp Emanuel Bach. However, it is indeed primarily thanks to the cultural policy of the Prussian monarch that Berlin became a noteworthy musical centre. In contrast to Dresden, in Berlin music was not only made at court, but throughout the city and beyond. There were countless private venues in the capital city in which concerts were given with the participation of members of the royal chapel. Double bass player Janitsch continued the weekly concert series that he had already organised in Rheinsberg as "Friday Academies." Chamber music in Berlin was firmly in the hands of professional musicians - the compositions they played were not mass-produced pieces, but rather substantial works that were likewise demanding in terms of technique  both violins play here on an entirely equal footing passages in seventh position that are more reminiscent of solo passages in a virtuoso violin concerto than chamber music for domestic use. All in all, Berlin, in contrast to Dresden, was a true chamber music El Dorado. Previous recordings have gained universal praise from the critics: "A dream team for this repertoire."  Early Music Review "The Ensemble Diderot plays these works with nimble expertise and good spirit" GRAMOPHONE

Ensemble Diderot has already released Dresden, London and Paris anthologies on this label, and very rewarding they are, too. This newcomer is no exception. Of especial merit are trio sonatas by the melodrama writing Georg Anton Benda, and Johann Gottlieb Graun, one-time leader of Frederick the Great’s orchestra. Their musical invention is lively and plentifully endowed with galant gesture.

It’s hard to single out highlights when the programme is not only built almost entirely of premiere recordings – there’s one exception – but also performed with such multicoloured finesse. That said, be sure to keep your ears especially peeled throughout Janitsch’s Trio Sonata in G – a work far beyond the technical reaches of the average amateur musician...In short, another city to savour.