From The Ground Up - Regent: REGCD539 - CD | Presto Classical Skip to main content 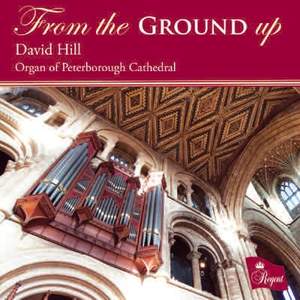 New, From The Ground Up

David Hill’s gorgeously coherent programme from Peterborough showcases some of the best of the genre by a septet of English-born composers...Needless to say that [his] enthusiasm for this generous... — Gramophone Magazine, November 2020 More…

Murrill: Postlude on a Ground

Willan: Chorale Prelude on a Melody by Orlando Gibbons

The first commercial solo organ recording showcasing the magnificent Hill organ of Peterborough Cathedral following its re-pitching to concert pitch and the addition of a new Tuba Mirabilis by Harrison & Harrison in 2016, and played by one of the UK’s most distinguished musicians, David Hill. The passacaglia deserves great celebration. From humble beginnings in 17th-century Spain it developed into an extended instrumental work with variations over a repeating ostinato, or ground bass, which itself can be varied, and became a form which has inspired composers to write some of their most powerful music. This recording features passacaglias for solo organ composed by English (or English-born) composers from the nineteenth to twenty-first centuries, Walter Alcock, John E West, Healey Willan, and a new work - Prelude and Passacaglia - by Richard Blackford especially composed for this recording. These large-scale pieces are interspersed with a selection of smaller works by several of these composers, together with a delightful piece based on a ground bass by Orlando Gibbons. The recording demonstrates the full tonal range of the Peterborough Cathedral organ, and in particular the commanding new Tuba Mirabilis which is heard right at the start of the programme.

Renowned for his fine musicianship, David Hill is widely respected as both a choral and orchestral conductor. His musical career included being Director of Music of Westminster Cathedral, Winchester Cathedral, and St John’s College Cambridge. More recently his talent has been recognised by his appointments as Musical Director of The Bach Choir, Music Director of Leeds Philharmonic Society, Associate Guest conductor of the Bournemouth Symphony Orchestra and Principal Conductor of Yale Schola Cantorum. He was Chief Conductor of the BBC Singers from September 2007 to September 2017 and is a former Music Director of Southern Sinfonia. In March 2018, he was honoured with the prestigious Royal College of Organists medal, in recognition of distinguished achievement in choral conducting and organ playing, and he was awarded the MBE in the 2019 New Year Honours.

David Hill’s gorgeously coherent programme from Peterborough showcases some of the best of the genre by a septet of English-born composers...Needless to say that [his] enthusiasm for this generous programme shines through. This, combined with Gary Cole’s immaculate engineering, makes this album a cause for celebration.