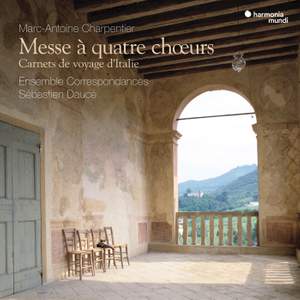 Daucé gives expressive shape to the music’s ebb and flow; tempos are beautifully judged, responding to the texts and their sacred context. The ensemble’s luminous vocal sound and instrumental... — BBC Music Magazine, February 2021, 5 out of 5 stars More…

Cavalli: Sonata a 12 in D minor

An Italian travel diary, Paris, 1665: a young composer leaves the Saint-Michel district to embark on a journey to Rome. The journey promises to be a long one, its stopovers rich in encounters for Charpentier... On this CD, Sébastien Daucé invites us on an imaginary recreation of that voyage of initiation, from Cremona (Merula) to Rome (Beretta), by way of Venice (Cavalli) and Bologna (Cazzati). A journey in space but also in time, through the sources of inspiration of a composer whose future works were to recall the colours of Italy - as the magnificent Mass for four choirs testifies.

Daucé gives expressive shape to the music’s ebb and flow; tempos are beautifully judged, responding to the texts and their sacred context. The ensemble’s luminous vocal sound and instrumental colours add to the lush sonic canvas...In short, this is an inspiring programme which highlights the reasons why Italy had such an overwhelming impact on the impressionable young Parisian.

This recital’s premise is a charting of Marc-Antoine Charpentier’s possible route to Rome, where he experienced the riches of the polychoral tradition...The Ensemble Correspondance makes a glorious sound.