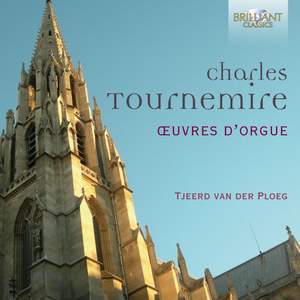 No. 2, Hodie mecum eris in paradiso

• Charles Tournemire was born in Bordeaux in 1870. A child prodigy he became organist-accompagnateur at age 11 at the St. Pierre in Bordeaux. At the Paris Conservatory he had lessons from De Bériot and César Franck, after whose death he continued with Charles-Marie Widor. In 1891 he became organist of the famous Basilika St. Clotilde in Paris, a post he held till his death in 1939.

• As a composer Tournemire was influenced by his teachers Franck and Widor. He expanded their harmonic system even more, using Gregorian Chant and even exotic elements from India to create a truly symphonic sound fresco of unprecedented scope and richness, evoking the mystical aspects of the Catholic faith.

• Played by Dutch master organist Tjeerd van de Ploeg on three French organs perfectly suited to the grand style of the music: the organ at St. Pierre, Douai, the organ at Cambrai Cathedral and the organ at Notre- Dame d’Auteuil, Paris. The technical specifications of these instruments are included in the booklet, which also contains detailed descriptions of the compositions.