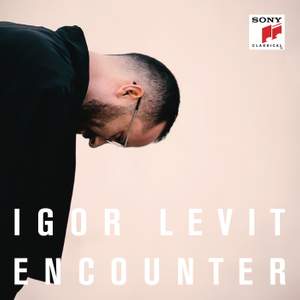 It’s certainly excellent to have them in such fluent, classy performances…All in all, a highly collectable disc, but not quite the epoch-making one the pianist’s stellar image has led us to expect. — Gramophone Magazine, October 2020 More…

'The new album ENCOUNTER by IGOR LEVIT will be released on 11 September on Sony Classical. A very personal double album marked by a desire for encounter and togetherness. The program includes rarely played arrangements of Bach and Brahms by Ferruccio Busoni and Max Reger, as well as Palais de Mari – Morton Feldman’s final work for piano.

Igor Levit’s double album “Encounter” seeks sounds that give inner strength and support for the soul. In works by Bach to Max Reger, based on poignant vocal compositions, the desire for encounters and human togetherness is given expression – at a time when isolation is the order of the day. The result is a very personal recital.

The 33-year-old once again steps beyond the limits of pure piano repertoire: in the Busoni transcriptions of Bach’s chorale preludes and the late Brahms, which are rarely heard as complete cycles, Levit assumes the role of an organist who fills vast church spaces. In Johannes Brahms’s Vier ernste Gesänge, he lends instrumental eloquence to overcoming the torments of fearing death. On the other hand, the gentle shimmer produced from its very few notes makes Morton Feldman's extremely quiet work for piano, Palais de Mari (1986), the epitome of a sensuous, transcendental realm of possibilities.

The repertoire presented by Levit here reflects the album’s title. The works create a community of experience for many individuals forced to maintain distance from one another. They establish contact with religious and inward spirituality. In addition, the inner connections between the composers and their respective aesthetics make “Encounter” a journey offering astonishing discoveries, even on ostensibly familiar terrain.

“The restricted isolation in the weeks since mid-March 2020 was often difficult for me too. As an artist, however, I have never felt so free, so open in my life as on those days when I often only decided half an hour before the live stream what I would play in my house concerts,” reports Igor Levit. The complete absence of routine concert activity also had its positive sides: “Being able to make music without any compulsion and spontaneously choosing works in which all questions about love and death, loneliness and the possibility of real love for others are examined, has given my piano playing a level of freedom that I had never before experienced in this form.”

It’s certainly excellent to have them in such fluent, classy performances…All in all, a highly collectable disc, but not quite the epoch-making one the pianist’s stellar image has led us to expect.

It’s a sequence of increasing introspection, steadily stripping away inessentials, until all that’s left are Feldman’s gentle spare phrases, all beautifully rendered by Levit.

Nothing Levit plays is ever ordinary, even when the music is familiar, which most of this isn’t. Take Brahms’s Op 122 chorale preludes; these too are heard in Busoni’s arrangements, every one a decorative and contemplative beauty, although they tickled me less than Busoni’s sensitively flamboyant reimaginings of Bach...By the end of Encounter I knew exactly what Levit’s lockdown goals were, for I’d reached them myself: quietness, balm, closure, peace.