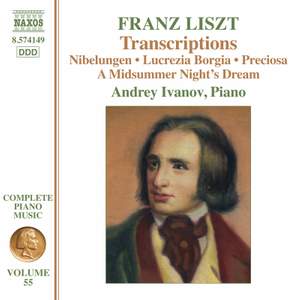 No. 2, Chanson à boire (After Donizetti)

This is the first in a series of six albums in a new venture between Naxos and the Royal Birmingham Conservatoire, presenting six debut albums for outstanding students at the Conservatoire. Andrey Ivanov features in a programme of Liszt Transcriptions, Vol. 55 of the Complete Piano Music edition. Copenhagen-born Eduard Lassen spent 40 years in Weimar where he was to succeed Liszt as music director in 1858. Lassen was an accomplished stage composer writing music for Das Nibelungenlied and Goethe’s Faust that enjoyed considerable popularity, and from which Liszt made piano transcriptions, drawing on high points in the dramas. He also wrote music for a play by Spanish poet Calderón, to which Liszt responded by transcribing an extensive Symphonic Intermezzo. Liszt also imbues the music of his contemporaries Mendelssohn, Meyerbeer and Donizetti with great fervour and virtuosity.