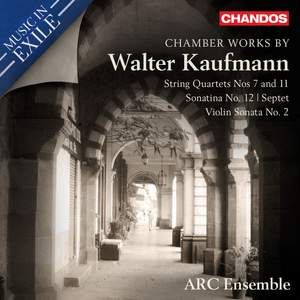 Of all the pieces compellingly performed by the ARC Ensemble, I was particularly taken by the Septet for the unusual combination of three violins, viola, two cellos and piano. This one-movement... — BBC Music Magazine, November 2020, 4 out of 5 stars (Performance) / 5 out of 5 stars (Recording) More…

For the fourth instalment in its Music in Exile series, the Toronto-based ARC Ensemble turns its attention to the music of Walter Kaufmann. Despite a very promising start in Prague and then Berlin, and friendships with Albert Einstein and with Franz Kafkas circle, Kaufmanns career become a casualty of the Nazi regime that forced scores of Jewish musicians to flee Germany in his case for Bombay in India. Kaufmanns intriguing and extensive body of work remains largely forgotten, certainly underappreciated, and perhaps most tragically, unperformed since first heard, although ironically, millions of Indians are familiar with one piece of his music the signature tune that he wrote in 1936 for All India Radio, which is still played every morning. The hallmark of this remarkable music, explains the ARC Ensembles Artistic Director, Simon Wynberg, is its striking originality. There are flashes of Debussy, Bartók, and Stravinsky, and hints of Bohemian and klezmer music, but the end result is a world of inventiveness and surprises. It is an extraordinary blend of Eastern and Western traditions, both adventurous and accessible, and no less compelling for the eighty-year delay since its first performance.

Of all the pieces compellingly performed by the ARC Ensemble, I was particularly taken by the Septet for the unusual combination of three violins, viola, two cellos and piano. This one-movement work presents striking juxtapositions between passages of fiercely percussive intensity and more reflective mysterious material, and encompasses an impressive range of emotions within its 15-minute duration.

The performances are brilliant—special praise is due to Erika Raum for her virtuoso fiddling on the Second Sonata, especially the wild middle movement, and kudos as well to clarinetist Joaquin Valdepeñas for his contribution to the Sonatina. Chandos’s sound is state-of-the-art red-book stereo, and as I’ve suggested, the notes are superb—a model for what record companies should be producing. A major discovery.

The ARC Ensemble have prepared this unfamiliar repertoire with care and a feeling for its beauties...One of Kaufmann’s own teachers had been Franz Schreker, composer of Die ferne Klang, and his quartet-writing has a ‘distant sound’ all its own, coloured by the Indian music that he had been studying even before his move eastwards.

Their strongly Czech accent, tuneful and melancholic, dominates, with sudden darts into raga mood. Kaufmann’s music, nuanced and unexpected, deserves to be heard.