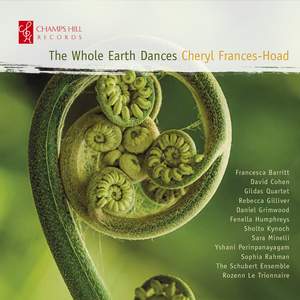 [The Prophecy] evinces a propulsion and cumulative intensity that speaks very much of youthful uninhibition...At the opposite end of the spectrum are brief pieces for flute, piano quartet, and... — Gramophone Magazine, November 2020 More…

II. Robots will Rule the World

Frances-Hoad: My Day in Hell

A first-rate journey through some of Cheryl Frances-Hoad’s most personal compositions, written over a twenty-year period. This diverse collection of chamber works showcases Frances-Hoad’s originality and artistry, featuring everything from The Prophecy, her first professional commission, to The Whole Earth Dances, The Schubert Ensemble’s final commission before they disbanded in 2018. Famed for her ingenuity and creativity, Frances-Hoad draws inspiration from everything from Dante and The Prodigy to the Commodore 64 game console and environmental issues. This latest release builds on Frances-Hoad’s long-established relationship with Champs Hill. She has previously released four critically acclaimed recordings on the label: The Glory Tree (2011); You Promised Me Everything (2014); Stolen Rhythm (2017); Even You Song (2017); and Magic Lantern Tales (2018). Cheryl Frances-Hoad has been composing to commission since she was fifteen. Classical tradition (she trained as a cellist and pianist at the Menuhin School before studying at Cambridge and King's College, London) along with diverse contemporary inspirations including literature, painting and dance, have contributed to a creative presence provocatively her own. Her output has been widely premiered and broadcast, and addresses all genres from opera, ballet and concerto to song, chamber and solo music.

[The Prophecy] evinces a propulsion and cumulative intensity that speaks very much of youthful uninhibition...At the opposite end of the spectrum are brief pieces for flute, piano quartet, and violin and piano that touch on more reticent while often ambiguous emotion...The Whole Earth Dances juxtaposes stark declamation with easeful contemplation through to the sombrely cathartic close, a gift for piano quintet, realised with conviction by the Schubert Ensemble.