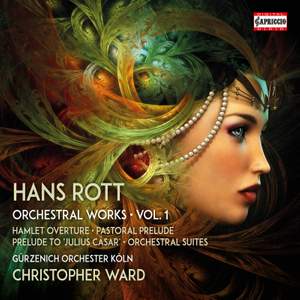 Excerpt,  Rott: Suite for Orchestra in B flat

Hans Rott, a composer and contemporary of Gustav Mahler, was unknown to most people of his day, and familiar to many critics only by his name. Many people have expressed the opinion, perhaps justifiably, that only his tragic early death prevented him from both securing a place in the annals of music as Mahlers equal and establishing a permanent position in the repertoire. A member of Bruckners circle within the music scene in Vienna, Rott developed a strong antipathy towards Johannes Brahms. When you hear his works, it's difficult to appreciate that they probably remained entirely unperformed outside the confines of conservatory life. With these recordings of his orchestral works (some of them reconstructed), Capriccio has sought to fill that gap and preserve his fascinating legacy for posterity.

The one piece that’s entirely new here is the Hamlet Overture, which Rott commenced in 1876 but never completed. It’s a striking piece, clearly influenced by Mendelssohn and Wagner but notably stylish and assured for a work by an 18-year-old composer….Ward and his players deliver polished and enthusiastic performances of Rott’s scores and the recording is satisfyingly detailed and expansive.