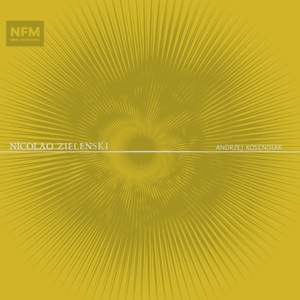 We present to you another CD with the music of the First Polish-Lithuanian Commonwealth, featuring the works of Mikolaj Zielenski, his Offertoria and Communiones published in Venice in 1611. I had to make a choice among Zielenski’s 113 surviving works, so I adopted a narratve based on the history of salvaton, or more precisely – the fulflment of the Scripture in the coming of Jesus Christ – the Messiah. The texts of the featured compositons refer both to the Old Testament events, the gospel and to the descriptons contained in the Acts, from the Annunciaton and Visitaton of St Elizabeth, Natvity, Slaughter of the Innocents, Presentaton of the Lord, to Golgotha, Resurrecton, the Doubt of St Thomas, Ascension, Martyrdom of St Stephen and glory to god. At the same time, I tried to show the diversity of line-ups and styles of Zielenski’s works from the 12-part Magnifcat and the double choir (eight-part and six-part) works to works for solo voice, while also differentiating the instrumental line-ups, and especially the basso continuo, which is performed by two theorboes, organ, harpsichord, harp, viola da gamba, violone and dulcian in various confguratons. In the vocal parts, the highest are performed by female sopranos, probably contrary to the practice of the turn of the 16th and 17th centuries. The featured works by Zielenski are masterpieces of musical art of the early 17th century, withstanding comparisons with compositons of the greatest masters of the era.