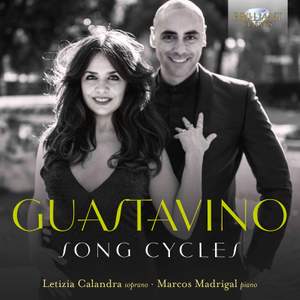 No. 3, Campanilla a dónde vas?

Carlos Guastavino (1912-2000) was one of the most important and famous composers of 20th century Argentina. He wrote over 500 works, most of them songs for voice and piano. He chose his own, personal style, rooted in the Romantic period of the 19th century, tonal, seductive and expressing his deep love for his country and its folklore. He is sometimes called “The Schubert of the pampas”.

Soprano Letizia Calandra and pianist Marcos Madrigal made a generous selection of songs by Guastavino. They catch the atmosphere of the songs to perfection, Calandra’s diction is top notch, she creates a myriad of vocal colours and she has the dramatic skills that allow her to convey the full theatrical sense of the texts. Marcos Madrigal, an excellent pianist from Cuba, knows the idiom inside out.

Letizia Calandra made several highly acclaimed recordings for Brilliant Classics in which her voice, a perfect blend of the cultured and the popular, is praised: “Scarlatti and the Neapolitan Song”, Donizetti songs, Erotica Antiqua and Ninna Nanna (lullabies).