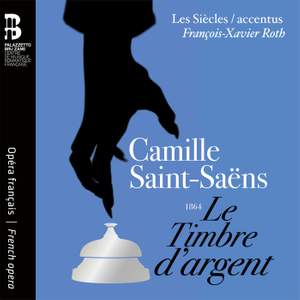 The score is as elegantly upholstered as anything that Saint-Säens wrote...Fiametta is a danced role which leaves something of a vocal hole in the middle of the work – particularly since the... — BBC Music Magazine, November 2020, 4 out of 5 stars (Performance) / 5 out of 5 stars (Recording) More…

Saint-Saëns's first opera, Le Timbre d'argent initially composed in 1864 need not fear comparison with some of the most celebrated works in the nineteenth-century French repertory. It depicts the nightmare of a man whose hallucinations anticipate by twenty years the fantastical apparitions of Offenbach's Les Contes d Hoffmann. A manipulative diabolical figure gives the hero a silver bell that he must ring to obtain the gold that will enable him to gain the love of the beautiful Circé; in exchange, a supposedly random victim must perish. But first Conrad's father-in-law, then his best friend are the ones to die. The flashback that resolves the drama already prefigures the cinematic devices of the following century. Le Timbre d'argent is presented here in its final version, dating from 1914, the last of ten revisions over a period of almost fifty years. The dynamic conducting of François-Xavier Roth and the exceptionally precise and fiery performance of the period-instrument orchestra Les Siècles demonstrate that Saint-Saëns was doubtless right to persist in considering the work as one of his masterpieces.

The score is as elegantly upholstered as anything that Saint-Säens wrote...Fiametta is a danced role which leaves something of a vocal hole in the middle of the work – particularly since the obligatory ballet has been cut. But those with voices sing handsomely and, happily, in a properly French style. Edgaras Montvidas is a tortured Conrad, and Tassis Christoyannis’s dark-voiced Spiridion has sulphur at his heels.

There are some dramaturgical wobbles and the score is uneven, though the best of it is magnificent…The recording itself is tremendous, conducted with infectious energy by François-Xavier Roth, and with Les Siècles really relishing every shift of colour in Saint-Saëns’s gorgeous orchestral palette. Edgaras Montvidas is a fine, empathetic Conrad… It’s immensely enjoyable, and one of Bru Zane’s finest achievements to date.

Gothic goings-on abound in Saint-Saëns’s first opera (given here in its final, 1914 version), and Roth and his period band rise to the occasion with just the right amount of Grand Guignol roughness around the edges; the plot may look forward to Offenbach’s Les contes d’Hoffmann, but the manic energy of the score has more than a whiff of Berlioz, and in particular the Symphonie fantastique. Montvidas, also a fine Hoffmann, is superb as the feverish artist who strikes a devilish bargain…or does he?