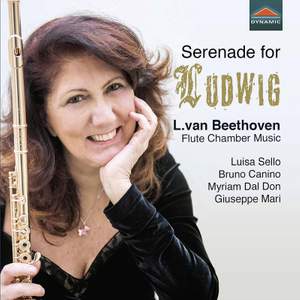 The programme on this release is completed by the arrangement for flute and piano of the slow movement from the Piano Concerto No. 1 in C major, Op. 15, a work Beethoven composed in 1798 and first published in 1800. The transcription is by Theobald Böhm (Munich, 1794–1881), a famous flute virtuoso and instrument maker, who developed a new type of metal flute which revolutionised the fingering system in use up to then and has remained virtually identical to this day. he programme on this release offers a comparison between two Serenades that Beethoven wrote for two different groups of instruments: the Serenade Op. 25 for flute, violin and viola and the Serenade Op. 41, which is a later version for flute and piano. Formally these two works are almost identical, but they differ in colour, phrasing and the role that was ascribed to each instrument.