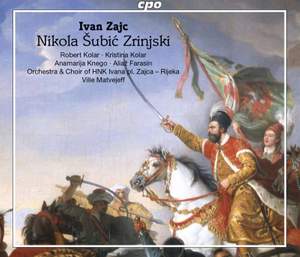 This live performance may reveal that the orchestra is not in the first division, but the Finnish conductor Ville Matvejeff shapes the score propulsively towards its battlefield conclusion (a... — Opera, October 2020 More…

Nikola Šubić Zrinski ranks ahead of Jakov Gotovac’s Ero the Joker as the most prestigious and historically most important Croatian opera of all time. Its composer, Ivan Zajc, even gave his name to the Rijeka Opera. cpo is now presenting the first complete recording of this opera for distribution not only in Croatia but also beyond this country’s borders. Following the performance, on which our recording is based, the singers and the presentation as a whole received rave reviews from the press and the critical guild, with Robert Kolar reaping special praise as the best Zrinski ever! The fact that musicologists refer to the relevant phase in Croatian music history as »the Zajc period« reflects the central importance of Ivan Edler von Zajc in Zagreb’s music world and the significant role played by him in Croatian art music in general. The Croatian writer Hugo Badalić drew on Zriny, a tragedy by the German dramatist Theodor Körner, in his libretto for the opera Nikola Šubić Zrinski. The story behind it is based on the historic Battle of Szigeth of 1566. The composer conducted the premiere of this work regarded as the Croatian national opera at the Croatian National Theater in Zagreb on 4 November 1876.

This live performance may reveal that the orchestra is not in the first division, but the Finnish conductor Ville Matvejeff shapes the score propulsively towards its battlefield conclusion (a short orchestral picture entitled ‘Katastrofa’). Robert Kolar brings a sturdy, ringing baritone to the title role; as Nikola’s wife Eva, Kristina Kolar sings with spinto power.