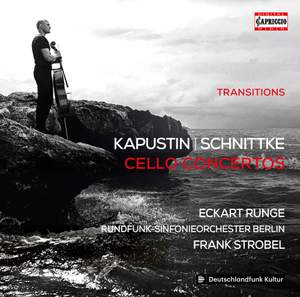 Kapustin’s joyful, American swing was as defiant an expression of individuality as Schnittke’s coruscating late Romanticism...Leaving aside moments of cliché, the intimate interplay between rhythm... — BBC Music Magazine, December 2020, 5 out of 5 stars (Performance) / 4 out of 5 stars (Recording) More…

The jazz-classical-modern fusion of Ukrainian composer Nikolai Kapustin (b. 1937) has recently become an exciting element of classical concert programmes. When the cellist Eckart Runge visited Kasputin in Moscow ten years ago, the composer entrusted him with the score of his Cello Concerto No. 1 op. 85, which, unlike his second, had neither been performed nor recorded. The work's energy uniquely combines colourful symphonic music with the groovy sound of the big band tradition, the virtuosity of a Charlie Parker with the chamber music intimacy of a Miles Davis, producing a vibrantly new musical language. With his fascinating, poly-stylistic sound world that he made his own, Alfred Schnittke is recognised as a 20th-century composer who is now permanently established in the repertoire, some two decades after his death. The Concerto for Cello and Orchestra No. 1 was commissioned by the City of Munich for the inauguration of the Gasteig Cultural Centre in 1985/86.

Kapustin’s joyful, American swing was as defiant an expression of individuality as Schnittke’s coruscating late Romanticism...Leaving aside moments of cliché, the intimate interplay between rhythm section, brass and cellist has a crackling spontaneity...It’s an ideal vehicle for Runge, a regular jazz improviser...From light to dark, Schnittke’s almost contemporaneous concerto (1986) opens up a vast sonic theatre.

[Runge’s] playing, though, is exemplary, as befits the cellist of the Artemis Quartet: technically polished and emotionally committed to both Kapustin’s high jinks and Schnittke’s polystylistic extremes.