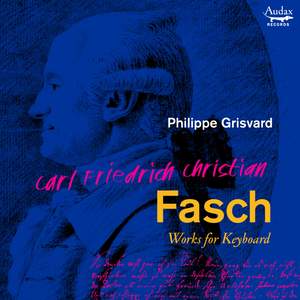 Karl Fasch, the son of the famous Kapellmeister of the court of Zerbst, Johann Friedrich Fasch, was harpsichordist at the Prussian court from 1756 until his death. Underemployed by Friedrich II and underestimated by musicologists, he has been forgotten for a long time. Philippe Grisvard is preparing to rectify this injustice with a program consisting of world-premiere recordings that will make it possible to discover an original and visionary composer. The Arts Desk said of Grisvard's previous release on Audax of Handel's keyboard works: 'And what Grisvard does so well is recreate what a contemporary observer described as Handel's uncommon brilliance and command of finger that amazing force and energy.