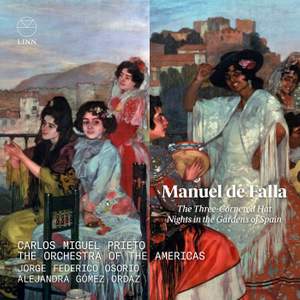 New,   Offer, Falla: The Three-Cornered Hat & Nights in the Gardens of Spain

Osorio is the soloist in Falla's highly atmospheric piano concerto, Nights in the Gardens of Spain, a set of symphonic impressions which conjures up the enticing sounds and scents of a summer's evening.

Conductor and pianist received critical acclaim following their performance of this work in Ireland: Prieto elicited a diaphanous palette of colours [and] as Osorio's arpeggios shimmered up and down the piano we were magnetically drawn into this highly evocative world full of lush sounds and sensuous possibilities.

Falla's finely crafted masterpiece The Three-Cornered Hat is both vibrant and colourful and showcases the superb precision of The Orchestra of the Americas.

The programme is completed by the Interlude & Dance from Falla's La vida breve and the Intermezzo from Granados exquisite Goyescas.

The Iberian sunshine certainly blazes brightly on this marvellously atmospheric second album from Prieto and his Mexican orchestra – everything really dances, textures are superbly balanced, and there’s particularly fine work from the punchy brass and raucous woodwinds as well as the airy mezzo Alejandra Gómez Ordaz in El sombrero de tres picos.

These Mexico-based young musicians have a stronger claim to be South America’s finest symphonic orchestra than Dudamel’s Simon Bolivarians. They sound completely idiomatic in two of Falla’s finest scores.

The recording is deliciously clear, with each instrumental colour sparkling, from castanets to bassoon.