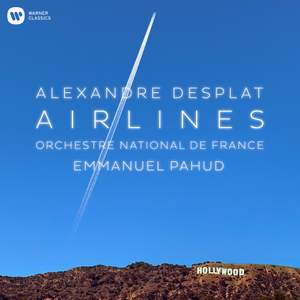 Desplat: The Shape Of Water

I. The Shape of Water

Desplat: Girl with a Pearl Earring

With Airlines, supreme instrumentalist, flautist Emmanuel Pahud, takes the music of an Oscar-winning film composer, Alexandre Desplat, into new realms. The album is entirely devoted to world premiere recordings – of original concert works and of reimagined versions of Desplat’s film scores, including Oscar-winners The Shape of Water (2018) and The Grand Budapest Hotel (2014). Pahud is accompanied by the Orchestre National de France, conducted by Alexandre Desplat himself.