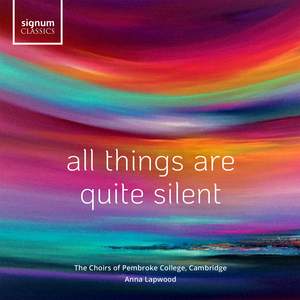 Offer, All Things Are Quite Silent

Rheinberger’s Abendlied is delivered with sumptuous, all-embracing delectation...At a single sitting, though, across the disc the choirs’ biggest asset – a malleable, velvety smoothness – turns... — BBC Music Magazine, December 2020, 3 out of 5 stars (Performance) / 4 out of 5 stars (Recording) More…

trad.: All Things Are Quite Silent

Beamish: In the stillness

Dove: Into Thy Hands

Shaw, C: And the Swallow

trad.: The Water of Tyne

Daley, E: Upon Your Heart

Tavener: Hymn to the Mother of God

Mvula: Sing to the Moon

Interview,  Anna Lapwood on All Things Are Quite Silent

The director of music at Pembroke College Cambridge talks about the debut album from the college's adult choir and recently-formed girls' choir, featuring an eclectic mix of sacred and secular repertoire.

Anna Lapwood is a trailblazing musician. As a broadcaster she is a regular contributor to BBC Radio 3 and hosts a live, weekly classical music show on BBC Radio Cambridgeshire. This year she makes her TV presenting debut, hosting BBC Four’s coverage of BBC Young Musician 2020. Alongside her work as a conductor, Director of Music and public speaker, she performs an extensive number of organ recitals on some of the greatest instruments across Europe each season.

Directed by Anna Lapwood, The Chapel Choir of Pembroke College has one of the most exciting and varied ranges of choral endeavours among Oxbridge choirs. Alongside their primary responsibility of contributing to worship in the College’s Chapel, they engage in regular artistic collaborations, media appearances and outreach work.

The Pembroke College Girls’ Choir was founded in October 2018 and has quickly gained a reputation as one of the UK’s leading girls’ choirs. Made up of 18 girls aged 11-18, the Choir sings twice a week in the College Chapel, as well as regularly singing alongside the Chapel Choir.

This album is the first commercial release for these choirs and Anna Lapwood as a conductor. It is a recording of some of the Choirs’ favourite music, some of which happens to have been written by women and some by men. It is the hope of all involved that the music on the record becomes more well-known and is performed more throughout the UK and worldwide.

Rheinberger’s Abendlied is delivered with sumptuous, all-embracing delectation...At a single sitting, though, across the disc the choirs’ biggest asset – a malleable, velvety smoothness – turns out to be a mixed blessing. It’s as if beauty of tone and fastidious manicure is an end in itself for Lapwood...Those who relish a long hot soak will feel right at home. Others who favour a brisk cold shower may well struggle.

There are a lot of firsts here in a album that blazes a trail on multiple levels...There’s a lot of music here, but all of it occupies a similar sound world – radiant, haloed, slow. You can see why: it showcases the choir brilliantly and smuggles a lot of contemporary music on to a recording with real mainstream appeal.