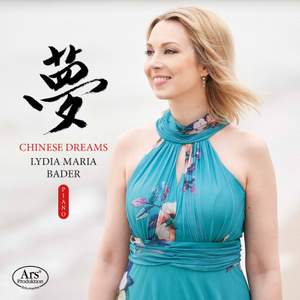 A fascinating East-meets-West album, partly of music by composers working within the restraints of Mao’s Cultural Revolution. It’s very beautiful at times. — BBC Music Magazine, November 2020, 4 out of 5 stars

III. Dance of the Waterweeds

No. 1, A Shanghai Tragedy

No. 2, Flirtation in a Chinese Garden

Pianist Lydia Maria Bader maintains a close relationship with China since her debut tour in 2009. Celebrated by the Chinese media as the German Piano Princess, her concert tours from South China to Inner Mongolia, often lasting several weeks, have already attracted tens of thousands of visitors. In 2016 she was appointed cultural ambassador of Gansu province. On 'Chinese Dreams' she plays piano works by contemporary Chinese composers based on traditional folk songs as well as works by Western composers inspired by China. It is music filled with beautiful melodies - melodies that deserve to be heard outside China.

A fascinating East-meets-West album, partly of music by composers working within the restraints of Mao’s Cultural Revolution. It’s very beautiful at times.