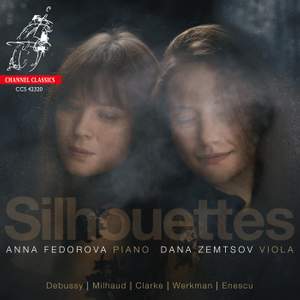 [Fedorova] specially captivating in the veiled quality to her tone with which she launches Clair de lune and the sensitive longing of Beau soir. Her rhythmic sense is best displayed in the Werkman... — The Strad More…

Werkman: Suite for Viola and Piano

World-class musicians Dana Zemtsov and Anna Fedorova joined forces when they discovered they have a mutual friend. ‘Do you know that feeling when coming to a new place as if the atmosphere you are in has been with you forever, recognizing it like an old friend? Our upbringing was similar, and filled with Guy de Maupassant, Gustave Flaubert, Victor Hugo, Alexandre Dumas, Jean de La Fontaine, Pierre Richard, Louis de Funès, Georges Brassens, Édith Piaf, Charles Trenet. This could be a logical explanation for us both experiencing this sense of familiarity every time we cross the border to France. Or maybe we have lived some of our previous lives in these surroundings that they seem so close to us?

This is by no means a story about France. Each piece in this album has its own story, its own thoughts and feelings. However, throughout it, if you listen with your eyes closed, you will occasionally sense the presence of a furtive silhouette ‘à la Française’. - Dana Zemtsov & Anna Fedorova (from liner notes

[Fedorova] specially captivating in the veiled quality to her tone with which she launches Clair de lune and the sensitive longing of Beau soir. Her rhythmic sense is best displayed in the Werkman suite and more neo-Classical aspects of the Milhaud. Anna Fedorova is a nimble duo partner.