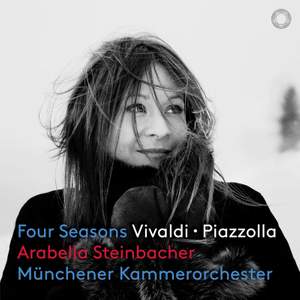 For those who despair at the number of recent ‘HIP’ versions…in which Vivaldi’s onomatopoeic effects have been allowed to run riot, Steinbacher’s alluring tone, espressivo phrasing, subtle vibrato... — BBC Music Magazine, September 2020, 4 out of 5 stars (Performance) / 5 out of 5 stars (Recording) More…

Star violinist Arabella Steinbacher presents Antonio Vivaldi’s world-famous Four Seasons alongside Astor Piazzolla’s Cuatro estaciones porteñas, creating a lively combination of baroque and tango. The enormous popularity of Vivaldi’s Four Seasons tends to make us forget the original and ground-breaking nature of these violin concertos. Coupling them with Piazzolla’s tango-inspired Four Seasons of Buenos Aires makes both pieces sound fresher than ever before, thanks to Steinbacher’s personal engagement with the repertoire and the inspired accompaniment of the Münchener Kammerorchester. Piazzolla’s music is performed here in a new arrangement for violin and string orchestra by Peter von Wienhardt, whose Strauss song arrangements on Steinbacher’s previous album Aber der Richtige ... (2018) were extensively praised by the press.

Arabella Steinbacher, a multiple award-winner with an extensive PENTATONE discography, is accompanied by the players of the Münchener Kammerorchester, who make their PENTATONE debut.

For those who despair at the number of recent ‘HIP’ versions…in which Vivaldi’s onomatopoeic effects have been allowed to run riot, Steinbacher’s alluring tone, espressivo phrasing, subtle vibrato inflections and bewitching cantabile should provide a vital tonic…Yet what makes this fine-honed account stand out from the pack is [the Piazzolla]…Steinbacher treads the fine line between Argentinian heat and Parisian cool with flair and sensitivity.

Having enjoyed her immaculately elegant Strauss album a couple of years ago, the smoky, dirt-under-the-fingernails verve of Steinbacher’s Piazzolla Seasons took me slightly by surprise; its impact is heightened by the fact that she treats their Vivaldi counterparts relatively straight, with no Kennedy-esque excesses but plenty of subtle imaginative touches.

Both soloist and ensemble approach the contrasting styles – baroque energy and bluesy Latin passion – with supple mastery, bows biting into strings, rhythms accentuated, mood at times aggressive. Vivaldi’s Summer, with its rushing storms and prickly, insect-ridden heat, sounds more than usually wild, with Steinbacher fearless in the rapid, high-flying outbursts. What a player.